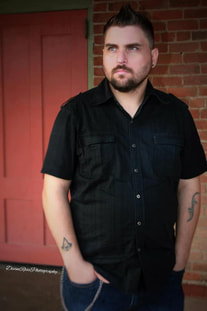 Adam M. Snow is a popular internet poet/writer, philosopher and photographer known by many. Snow was born May 30th of 1988 in Phoenix, Arizona. He currently lives in El Mirage, a small rural town in the western Arizona. Adam is Shakespeare’s twenty second generation descendant on Shakespeare's mother’s sister’s side; from the blood lines of Margaret Arden and Sir Alexander Webb. When Adam was born, he was lacked of oxygen and had almost died. At age 5, Adam was soon diagnosed with ADHD with speech impediment. Later on in life, Adam found that he was misdiagnosed. He was not ADHD like he was raised to believe, he was in fact diagnosed with Asperger, a type of autism. In 2003, Snow started writing poetry, although he originally started writing short stories. It was through his cousin that had inspired him to write poetry in the first place. Adam writes metaphorical style poetry and has experimented often with different styles of poetry; such as free verse, ode and lyrics. In high school, Adam was a bullying victim; as a result, he kept his distance from everyone. In 2006, Adam graduated from Tolleson Union High School; he suffered many years of unemployment after that. On the 9th of December in 2009, he lost his father to lung cancer; some of his poems he wrote, he wrote for him. Adam is a Conservative Pentecostal Christian, yet some of his poetry can be dark, but with a biblical meaning throughout it. Over the years, Adam has had so many people tell him that he should stop writing, that he’s not good. That never stopped him; he still writes poetry to this very day and he continues to inspire people through his works, whither it be from poetry or photography.